How Often Do Referrals From A Place for Mom Stick to Their Stated Budgets? 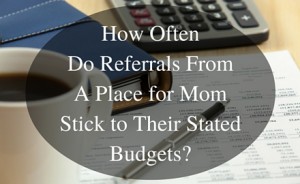 Should you ignore a referral alert from A Place for Mom because their stated budget falls slightly under your price range? To find out, we looked at tens of thousands of move-ins that resulted from referrals from our Senior Living Advisors to our Partner communities, comparing the actual monthly charges at move-in to the family‚Äôs stated budget range at time of referral.

The Range of the Stated Budget Matters

We found that leads with smaller budgets often end up spending more than they initially planned. Fewer leads at the high end do so. To put this finding in perspective, assisted living move-ins with a budget max of $2,499 spend on average about $670 more than their max whereas those with a max of $5,999 spend only about $109 more than their min. For memory care, those figures are about $1,550 and $764, respectively.

Below we plot the median and spread of move-in charges against stated budget ranges. Notice how nearly half of the leads with a budget $2,499 or below spend more than their budget max. On the other hand, nearly half of move-ins in the top budget category spend less than their min. 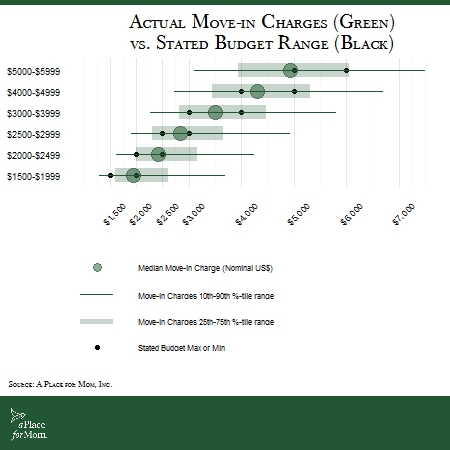 You may also wonder if this trend is driven mostly by seniors calling about care for themselves. There are at least three reasons to think this the case:

In any of these three cases, we would expect the trend to exist only for seniors who call for themselves and not for leads calling for another.

To see how care acuity matters, we took for each move-in the difference between their actual move-in charges and their stated budget‚Äôs midpoint as a percentage of the budget midpoint. Then we looked at the median and spread of that percent difference for each care type, including assisted living, independent living and memory care. We also compared leads who called to inquire about care for themselves versus those who called for someone else.

Below, we plot the spread of the percent difference. Notice how the budget-amount trend gets stronger with higher care acuity. Independent living has the weakest trend and memory care the strongest. The trend also exists both for leads who called for themselves and those who called for another. In fact, the results are very similar for both lead types, at least for independent and assisted living.¬†So the budget trend we see isn‚Äôt driven by the fact that seniors calling for themselves may have more conservative budgets, fewer assets or outdated expectations about the cost of living. 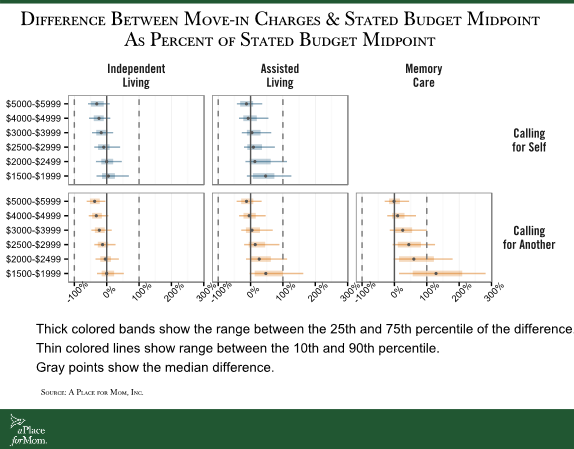 Why Does the Stated Budget Matter?

It‚Äôs likely that leads with smaller budgets overshoot because they lack the knowledge of how much senior living costs. This lack of understanding is driven mostly by the dearth of free and open cost-comparison tools, but also because many people do not know the value of modern senior living. It also stands to reason that the more modest the lead‚Äôs budget, the less access and familiarity they have with the senior living market, so the less realistic their budget will be.

For larger budgets, it may be that high-end leads end up spending less than they could afford in the anticipation of needing those funds down the road when their care needs increase. It could also be that communities are more likely to offer move-in incentives to high-end leads, much like how real estate agents accept lower commission percentages for multi-million-dollar home sales.

Based on these findings, it‚Äôs clear that you should think twice before dismissing a referral alert just because the stated budget falls slightly under your price range. These leads may just need to modify their expectations, especially for assisted living and memory care costs. As for high-end leads, the jury is still out about why they often undershoot their stated budget, and we‚Äôll dig deeper into this in later articles. For now, just remember that a sizable number of high-end leads also end up moving in at a price point higher than their stated budget.

Later this year, we‚Äôll shed more light on this topic by looking at how financial options and care needs explain these trends. We‚Äôll also help you build a more complete strategy around leads with budgets below your price range by looking at how their stated budget affects move-in rate, not just the difference between stated budget and actual move-in charges.

Have you noticed a difference between a prospect’s stated budget and their actual monthly charges? Discuss in the comments below!

Our previous analysis looked at a small subset of our Community Partners. This time we look at data from over 6,000 independent living, assisted living and memory care communities across the United States, managed by over 1,000 of our Partners and representing tens of thousands of moved-in residents where the lead stated their monthly senior-living budget range to a Senior Living Advisor at A Place for Mom. We include move-ins from 2014 through February 2016, but exclude data from Partners who are on a subscription or flat fee schedule (due to state regulations) because we do not collect data on move-in charges from those communities. We also include only move-ins with a stated budget between $1,500 and $5,999 due to the rarity of move-ins outside that range.

When calculating percent difference between actual move-in charges and stated budgets, we adjust both for inflation using the monthly national Consumer Price Index for All Urban Consumers (seasonally adjusted) relative to its 2015 average. All statistics reported are summary statistics, not model estimates. We exclude the top level budget ($6,000 and above) because there is no budget maximum for comparison.

Understanding the Value of Online Ratings & Reviews
How the Increase of Men in Memory Care is Changing the Industry
How Often Do Prospects Stick to Their Stated Budgets?