How Often Do Prospects Stick to Their Stated Budgets? 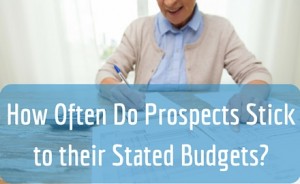 How often do you receive a referral and wonder if the family will be able to afford living in your community? We have found that a senior’s initial budget does not always disclose the full amount that the family is willing and able to pay to move their loved one into their new home.

A Place for Mom’s Senior Living Advisors (SLAs) have two roles when discussing the financial side of senior living with families:

Our Advisors do their best to examine all possible sources of a senior’s income, but many people who inquire with APFM have not yet done their due diligence when it comes to their loved one’s finances. When you receive a referral from APFM, the referral alert will have the Advisor’s best estimate of the family’s budget, but that won’t necessarily capture the full picture of the family’s finances. Once the family starts touring, sees the value in senior living, and finds the community that feels like home, many seniors and families find that they are able to pay more than they initially thought.

Don’t Delete The Referral Alert Yet

This might seem shocking, but there‚Äôs value in taking the extra five minutes to research the¬†family‚Äôs budget. Don‚Äôt delete the¬†referral¬†alert just¬†because¬†the family doesn‚Äôt look qualified on the surface. Our data might surprise you, but it clearly shows that families are not initially stating their budgets when they speak to our SLAs. 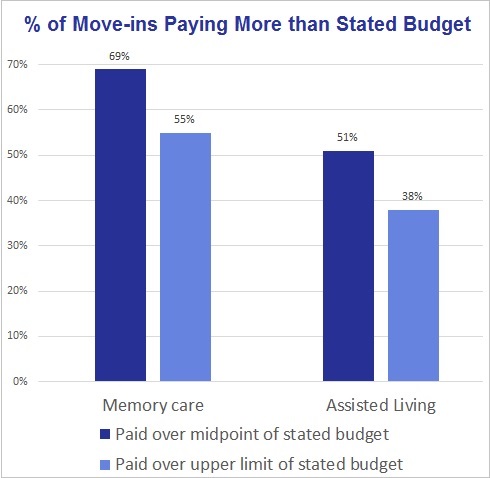 While we suspected that families were paying over that initial budget, we wanted to look at our data to see how much a family’s budget increases by the time they choose a community. The results show that for both assisted living and memory care the majority of referrals paid more than the midpoint of their budget range, and a large percent paid more than the upper limit of the budget range. (A Place for Mom referrals come with a budget range rather than exact amount – for example, $3000-3,999, so the midpoint of a family with this stated budget would be $3,500, and the upper limit would be $3,999.)

While APFM’s Advisors do great work to educate the family on the cost of senior living and all of their funding options, the family is making a large purchase decision and will not always share their full budget until they have a chance to see a few communities and understand the value of senior living. Keep these statistics in mind with every referral that you receive from A Place for Mom and reach out to the referring Advisor if you would like to discuss the family’s situation further.

Do you have any tips on gathering accurate budget information from a new prospect? Share in the comments below!

Identify Your Key Competitors
Join A Place for Mom's Online Community of Senior Living Experts
Handling Inquiries: Are you an Order Taker or True Sales Professional?