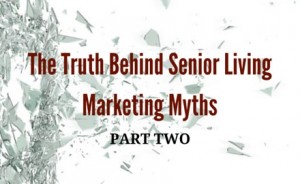 Today I would like to discuss four more senior living marketing myths and how they may be keeping your community from maximizing its potential and reaching its occupancy goals. Click here to catch up with Part One if you missed my post the first time around.

#5: By keeping our marketing in-house, we avoid paying for leads we would have gotten anyway.

Paying for move-ins you would have gotten anyway from cheaper sources is called ‚Äúcannibalization.‚Äù Every marketing channel cannibalizes from every other channel. The real questions are 1) How much are they cannibalizing, and 2) Is it too much?

Let‚Äôs say you have a marketing channel that is costing you $10,000/move-in and getting you 10 move-ins per year. You magically know that if you turned off that marketing channel you would still get 5 of those move-ins. They would find you some other way. Assume that that ‚Äúother way‚Äù doesn‚Äôt cost you anything.

This marketing channel has a 50% cannibalization rate. That‚Äôs bad. It means that those move-ins aren‚Äôt costing you $10,000 per move-in. They are really costing you $20,000 per incremental move-in. Should you turn off the terrible cannibalizing channel?

In the real world you will never know your exact cannibalization rate. There are ways to estimate it, but none of them will be extremely accurate. Instead you need to determine your ‚Äúbreak even cannibalization rate‚Äù and then use your business judgment to decide if that rate seems reasonable.

In the $10,000 per move-in example, where each move-in is worth $36,000, your break-even cannibalization rate is 72%. To get to a 72% cannibalization rate you would almost need to be standing in front of your building intercepting people walking in anyway. It‚Äôs unlikely.

#6: Paying per move-in is more expensive than buying leads or display advertising.

If you had a choice you would pay $10,000 over $36,000. And you would pay $1000 over $10,000. $1 per move-in sounds even better. There is always a question of how to get more move-ins at a lower rate. If your property needs five move-ins per month to stay full you should start on the cheapest (per move-in) marketing channel first. Only when it has been fully utilized should you move to the next cheapest marketing channel. For example, you might have a lot of success putting $10 ads in a local church bulletin. You run $10 monthly ads every month and get a move-in from it every year. That‚Äôs $120 per move-in. Why not just do more of that?

You could try doubling the size of your ad and paying $20/month, which might get you more move-ins (or it might not). You could find other churches that have bulletins where you could advertise (and hope they are as cheap and as effective). Sooner or later you will run out churches. Then you need to look to your next channel.

You are likely marketing through many different channels now. For each channel you should determine what your cost per move-in is. This is easier said than done. Maybe you run radio advertising. How will you know which of your new move-ins came from the radio ads?

Other marketing channels may not require you to pay per placement. They charge you based on activities further down the funnel. Online display advertising charges ‚Äúper thousand views‚Äù ‚Äì one step further than your radio ad. Google search advertising charges you based on clicks (or engagement). The old pay per lead model charges based on contact information sent to you (leads). Many referral agencies (including APFM) charge based on move-ins. No matter how the marketing channel charges you, your job is to figure out what that channel‚Äôs cost per move-in is.

If your clicks turn into leads at 10% (Your Click-to-lead conversion rate) then the click channel is costing you $50/lead. That looks pretty bad in comparison. But if your conversion rate is 30%, then your cost per lead is less than $17. If your lead is turning into move-in (move-in conversion rate) 1%of the time, you are paying the same amount for pay per lead as you are for pay per move-in.

The challenge is that it takes a lot of time to measure these conversion rates. In the meantime you bear the risk. If someone offers you $30/lead it could be great:

Or it could be terrible:

The problem is that you are on the hook no matter what.

Paying for marketing channels early in the funnel (like radio) can often be good choices, but the further you spend away from the move-in the more risk you are taking on. The next time a radio station tells you that they are 100% convinced they are the most effective marketing channel for your spend, ask them to put their money where their mouth is. Tell them you will run ads and give them their own dedicated phone number. If anyone calls the number and then moves into your community you will pay the station $3000. All of a sudden they will be a lot less confident that their channel is amazing.

I have personally had this conversation with many people trying to sell me advertising. Rarely will they step up to the plate and guarantee a price for a specific impact. If you can convince a marketing channel to allow you to pay per move-in instead of per placement or per viewer or per click, you will almost always be better off.

#7: My marketing channel is unsuccessful if I‚Äôm getting more leads but my conversion rate is declining.

Last year summer my best marketing channel gave me 100 leads and 10 move-ins. This summer they gave me 200 leads but only 15 move-ins. Something bad happened, right?

Not necessarily. A common method of measuring conversion rate is to take all the move-ins from a channel in a month and divide by the leads from that channel in the same month. It‚Äôs usually roughly right. Let‚Äôs look at occasions when it‚Äôs wrong.

What if it‚Äôs a small channel that on average sends two leads a month, but they move-in about 50% of the time (so one move-in a month)? Let‚Äôs say that channel, from random fluctuation, sends 4 leads in January and 1 lead in February. In January the channel gets its normal move-in (say from a lead sent in December). Two of the leads from January eventually move in ‚Äì one in February and one in March.

The example above isn‚Äôt the end of the world. You under-state January‚Äôs conversion, but then over-state February‚Äôs conversion. It all works out in the wash. Where you run into real trouble though is growing channels. As an extreme example, imagine if a marketing channel were doubling in size every month and all leads took a month to move-in, and they moved-in half the time (50% conversion). In this example your cohort-based conversion rate would be 50%, but your activity view conversion rate would always be 25% (since the number of leads you would be dividing the move-ins by would be double). 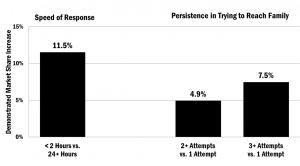 I hear this myth a lot. ‚ÄúI would love to call back all my leads quickly, but we don‚Äôt have enough people.‚Äù My answer: Find more people.

Calling back within 2 hours instead of 24 hours 20 times a month is worth a more than a move-in a year ‚Äì or more than $36,000 per year. If you were getting 40 leads a month, and can expect two move-ins per month, it would be worth your time to hire a full time person at $72,000/year to sit by the phone and just wait for a lead or so per day to call back within two hours.

Obviously it would not take very much work to find a better solution that that. Maybe block out someone‚Äôs calendar for 30 minutes every two hours to respond to any new inquiries. Is that worth $72,000 to you?

I hope exploring these myths have been useful. If you disagree with any of the conclusions please let me know in the comments below, or by tweeting me directly at @EdNever. I would be happy to continue the discussion. If you operate a community and you don‚Äôtwork with APFM but would like to understand how to get started, please reach out to our Customer Experience Team at newpartners@aplaceformom.com.