New data by A Place for Mom reveals that over the past three years, male move-ins to memory care are growing at a rate that is 14% greater than women. Learn more about this new insight and what it means for your community. 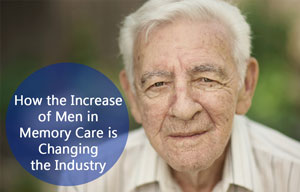 Why It‚Äôs Happening and What It Means to You

If I use the words ‚Äúdemographics‚Äù and ‚Äúsenior care‚Äù together, I bet your mind immediately goes to the growing numbers of Boomers who are exiting the workforce and entering senior living. This is a very important demographic trend for our industry, but it isn‚Äôt the only one that matters.

Two times more women than men move into memory care, but men are catching up.

Alzheimer‚Äôs disease tends to affect a disproportionately large number of women. According to the Alzheimer‚Äôs Association, nearly two-thirds (65%) of people over the age of 65 who are suffering from Alzheimer‚Äôs in the U.S. are women.¬†A Place for Mom‚Äôs historical data backs up this 2:1 female to male ratio. However, recent data suggests that the trend is beginning to change.

A Place for Mom‚Äôs figures show that move-ins by men to memory care communities are increasing 14% faster than women over the past three years. Our partner communities have reported significant influxes of male residents, sometimes two to five times as many male inquiries compared to just a few years ago.

‚ÄúWhile women continue to be diagnosed with Alzheimer‚Äôs Disease at a higher rate, we are seeing a significant increase in men seeking memory care with the number of our male residents doubling in the past 18 months,‚Äù said Megan Carnarius, RN and Executive Director for Balfour Cherrywood Village, an Alzheimer‚Äôs and memory care community located in Louisville, CO. ‚ÄúThe prevalence of the disease in more people could be attributed to more people living longer. The older you get, the higher chance you have of getting the disease, and men specifically are living longer.‚Äù

Of the people that move into licensed care with A Place for Mom, 27% of men require memory care services versus 21% for women. 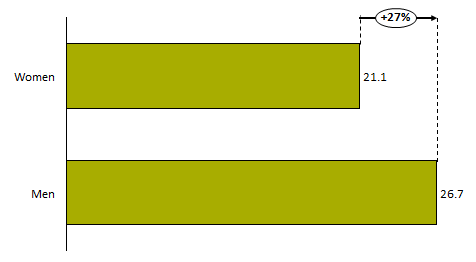 Percent of Licensed Care Move-Ins that Include Memory Care Support

Why Are More Men Moving to Memory Care?

A Place for Mom‚Äôs research suggests two factors are causing growing numbers of men to move into memory care:

Women tend to live longer than men, but the gap between the two is gradually shrinking. Both genders are living longer, but the male average lifespan is increasing faster than that of women. Male life expectancy increased 6% in the past 25 years, which is twice the rate of women. Experts have pointed to a number of factors driving this trend, including fewer wars, reduced risky behavior like smoking, lower propensity for obesity and better treatment of gender-specific diseases. Higher life expectancies mean men have a higher likelihood to live long enough to require Alzheimer‚Äôs or dementia care. This is a key factor driving the gender difference of memory care populations which explains most of the difference.

When men and women reach out to A Place for Mom, they are not equally likely to display symptoms of memory diseases. Men are 8% more likely to exhibit wandering tendencies and 30% more likely to have issues with combative behavior. Combativeness can force the transition to memory care. Evan DuBro, CEO of Our Family Home, notes that it can be more difficult for wives and daughters to be caregivers to the end. Men are likely to be bigger and stronger than women, in addition to being more likely to exhibit combative behavior. Frequent agitation complicates caregiving and can speed the transition to professional memory care. 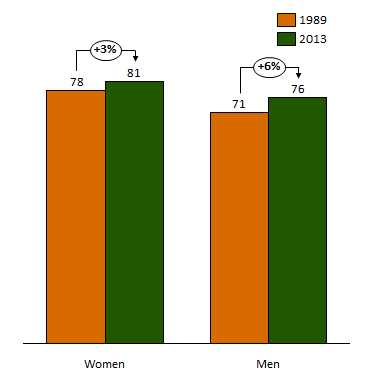 What This Means for Memory Care Communities

When we speak to partner properties about gender and memory care, they are quick to point out their focus on tailoring care to each individual resident. This is a sound approach, but it shouldn‚Äôt prevent awareness about differences between male and female residents. Increasing numbers of men living in memory care communities has implications for providers.

Memory care providers that partner with A Place for Mom shared some examples of how they are making changes to care practices in response to the increase of men requiring memory care.

This fast-moving trend has important implications for the management of memory care communities. Juliet Holt Klinger, VP of Dementia Care at Brookdale, notes that their communities have been adding more male-oriented spaces like work benches, military reminiscing areas, and sports areas. Of course these features aren‚Äôt the exclusive domain of men, but they can be effective marketing tools for prospective male residents and great for keeping existing male residents engaged.

Men‚Äôs interests are sometimes different than women and it‚Äôs important that caregivers get to know each person to understand their backgrounds, past careers, and their interests. This helps to identify what they are accustomed to doing on a daily basis, which facilitates engagement. One clever caregiver at HCR Manorcare learned that a memory care patient used to referee their high school football games. When the resident would get agitated, the caregiver would call over and say, ‚ÄúHey Joe, I want to talk with you about that game where I threw three interceptions.‚Äù It calmed him down every time.

3. Knowing How to Diffuse Aggressive Behavior

Men are usually physically larger and stronger than women, and even aged men can be quite strong. Senior care staffs generally skew female, which means staff should be trained to manage and diffuse triggers of aggressive behavior. Caregivers at Brookdale are trained to approach caregiving as a partnership with the resident, versus ‚Äúyou are in my care and I‚Äôm going to tell you what to do.‚Äù The former attitude empowers the resident, which helps maintain self-esteem.

Men often are very proud and don‚Äôt like having help, especially for simple tasks like shaving that they‚Äôve been doing independently for decades. Finding and empowering seniors to do activities they can do on their own as much as possible is important. Kristin DuPont, Director at the LaSalle Group, told the story of a resident that came to the dining room but wouldn‚Äôt eat, claiming that it was ‚Äújust too much food.‚Äù They would serve smaller portions but that didn‚Äôt work, and the staff was worried that he wouldn‚Äôt get enough to eat. The Chef had the idea to put the same amount of food on a large platter. The portion looked much smaller so he ate it.

Males‚Äô higher likelihood to be combative and wander suggests that their health needs are more acute when their loved ones reach out for help on their behalf. More acute health needs mean that you can expect a shorter length of time between inquiry and move-in. A Place for Mom asks every family we speak to about when they expect to move. Families of male seniors have a greater of urgency on average. Loved ones of male prospective residents are 43% more likely to expect to move within 7 days, and 17% more likely to expect to move within 30 days.

Does your community have amenities that are catered to men? Please share your ideas in the comments below.

How Often Do Prospects Stick to Their Stated Budgets?
Conveying the Benefits of Memory Care When ‚ÄúMom or Dad isn‚Äôt There Yet‚Äù
Senior Living Consumer Preferences Survey